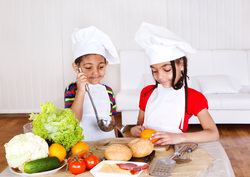 “Food is our common ground…” James Beard
What social occasion does not involve food? Whether it is a birthday party or funeral, religious or national holiday, graduation, wedding, staff meeting, or family dinner, food brings us together around the table of life. Despite our human differences — gender, age, ethnicity, socioeconomic status, sexual orientation, political party, religious orientation — we are all dependent upon food for life. Food illustrates the fact that we are more similar than we are different from one another.

Love Thy Neighbor?
While we all share in the act of eating, it is seemingly commonplace to set our ideals for good nutrition aside when it comes to our own communities. The amount of junk food that circulates through our public school system, for example, is appalling! It is only recently that this issue is being noted and addressed. And why do we engage our children in healthy activities like soccer, baseball, and swimming and then reward them after a practice or game with mini-packages of cream-filled cookies or gummy snacks? A thought to “chew on” here might be that perhaps this personal lapse in our “good intentions” somewhat echoes the lapses in our own expressions of spiritual integrity. The pursuit of oneness, or the wholeness of our beings is, after all, about the true integration and expression of our highest principles.

Global Imbalance
In March of 2005, headlines read: “Obesity spreads across the Atlantic to Europe: Weighty problem now as big as in U.S.” How can we possibly have a good feeling about such disturbing information? One theme that we see over and over is how the populations of other countries that are slowly but surely expanding their girth are doing so by becoming more like us! They either immigrate to the United States and begin to adopt our lifestyle, or we push our convenience-based lifestyle onto theirs ( Coke, McDonalds, etc.) so that they begin to suffer the same physical fate as ourselves.

Paradoxically, there are 34 million people in the United States — including 13 million children — who suffer from hunger. As distressing as hunger is in the US, its prevalence is greater and its consequences more severe in developing countries.

Extending the impact of our food choices to our global community, we now begin to recognize the impact that our food choices have at the local, national, and global levels. The amount of water needed to make one McDonald’s hamburger, for example, is roughly equal to the amount of water used by a family of four in the Amazon in one month. That’s because we need water to grow the plants that feed the cattle. The amount of vegetable protein used to grow cattle for our fast-food chains is equivalent to the world’s protein deficiency. Meat production is tremendously energy intensive, while production of plant food is 10 to 100 times more energy efficient. On a vegetarian diet, the world has enough resources to feed several times the current world population. As long as a minority of the world’s population demands large quantities of meat, there is going to be a life and death struggle for food somewhere in the world.

It is not necessary to give up meat completely in order to participate in global healing. 60 million people could be fed adequately with the grain that would be saved if Americans reduced their meat intake by just 10 percent!